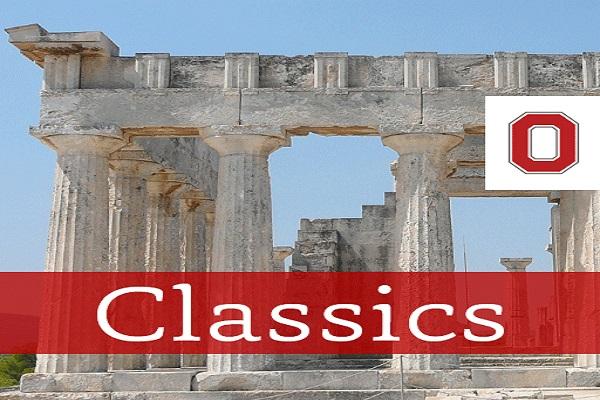 Please join us for the annual 2022 Classics Graduate Student Colloquium.

We are very pleased to invite you to this year's installment of OSU's Graduate Classics Colloquium, The Missing Middle: Being Roman After Antiquity

Identity in Late Antiquity and the early Middle Ages has been a topic of sustained scholarly focus for a century now, focusing particularly on the various Germanic peoples that migrated into the Roman Empire. However, a curious gap can be seen in the scholarship. Although we owe most of what we know about the identities and makeup of the various peoples in the broader Mediterranean world to Roman sources, late antique/Byzantine Romans and their identities have gone understudied, especially so in the east. This has formed a missing middle as scholars predominantly look out but not in. Only recently have basic questions about what it means to be Roman in this period received the investigation they merit. Still, much work remains to be done to explore the contours of Romanness.

At this conference we hope to highlight the work that graduate students are doing to advance our understanding of these topics. We invite papers that will discuss topics regarding what it means for someone or something to be Roman in this period from any field, including but not limited to Archaeology, Near Eastern Languages, History, Linguistics, Religious Studies, Art History, Classics, and Anthropology. Preference will be given to topics focusing on the Eastern Mediterranean; however, we encourage submissions that touch on Roman identity topics from the post-Roman west, that might make comparisons to other cultures, or that look at Rome from an outside perspective, especially from the Islamic world. Interdisciplinary papers that touch on these topics are also encouraged.

The event is open to everyone and will take place on Friday, March, 11th 2022-March 12th

Please feel welcome to circulate this to whoever might be interested! Any questions can be directed to osuclassicscolloquium@gmail.com. We hope to see you all there.